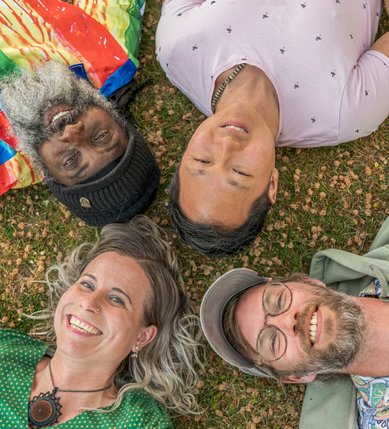 Lalou is interested in minorities, people, who don´t get much attention in society, because their stories apparently do not have the value of a “good story” in the newspapers and magazines.

“My aim is to support those human beings, who are left behind on the margins of society”, Lalou says. “I am inspired by all those stories and voices I meet in my everyday life, that are often left untold or don’t catch the interest of the media in the fast flow of information these days. These stories form the music I write. Small portraits of individuals are the main ingredients of my songs. Some of them face harsh challenges, or perhaps they don´t belong to the majority, though they all have the same dreams as the rest of us: to fit in, to feel good enough, to live a life of contentment and fulfillment.”

“On the horizon there is always hope”, Lalou sings in her songs. “That´s the message, I want to spread to my audience”. Lalou points out: “You always have a chance to say no. And it’ll become easier and easier for you to stand up for yourself when you practice! You can do it!”

...consists of elements of pop, jazz, folk and a gentle touch of world music. The melodies are catchy and easy to sing along with in her live performance. Even though the audience doesn’t know the song, they quickly learn the sing-along parts. And Lalou loves to sing together and engage with her live audience. And to make them reflect on all the issues, the songs deal with.

You can read about the musicians below: 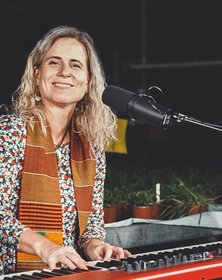 All of her life Lalou has had the sound of catchy jazz melodies running in her veins and singing in the core of her soul.

After a childhood and education in northern Germany and a lot of travelling all over the world, Lalou’s journey took her to Denmark through her musical connections. Lalou began her career as a solo performer and songwriter in late 2019, so she is a fresh talent on the Danish music scene, who has made herself noticed in especially the southern part of Denmark, where she is based. 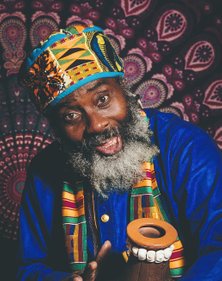 Ayi Solomon, a percussionist from Accra, Ghana currently Living in Copenhagen, Denmark since 1982 arrived with the Reggae band Classique Vibes. The whole band went to West Germany on a Contract to perform in the American clubs at the US military bases. In 1983 Ayi returned to Copenhagen and stayed. In the Danish Music scene he has travelled the world with New Jungle Orchestra, (as a member) Palle Mikkelborg, Moussa Diallo, Rasmus Lyberth, Himmerland and many more. Solomon has released a number of albums to his credit and has done groundwork for many African musicians that relocates to Scandinavia. www.ayisolomon.dk Music available on Spotify 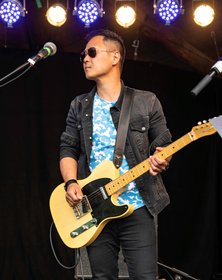 First and foremost however  Jens Vestermark is a well known guitar player in various bands and soloists, with whom he has been touring in Denmark and Europe. He masters a multitude of musical genres, and has played both bluegrass with Nohrland, rap with Negash Ali, indie with She´s a Sailor and pop/rock with Danni Elmo.  Jens also composes his own material and is currently working on his first solo record. 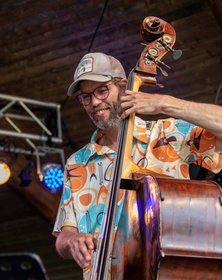 5 times DMA winner and an honorable mention at DPA’s acclaimed songwriting contest makes bass player Søren Lund  somewhat of a musical chameleon, who masters many musical genres and styles: Argentinian tango,  folk,  rock, funk/soul and avantgarde free-jazz and everything I between! But it is in the universe of jazz impro that Søren’s expressive, talented and playful musicality really shows. Søren is an accomplished and widely known and respected sideman in a broad variety of bands and soloists. 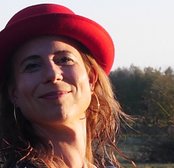